Kodama, a neuroscience major with a minor in the Writing Seminars, will receive her degree before beginning her studies at Cambridge, where she will research the mechanisms underlying the formation of neural connections

Lay Kodama, a Johns Hopkins University senior from Columbus, Ohio, has been selected as a Churchill Scholar by the Winston Churchill Foundation of the United States. The Churchill Scholarship is awarded to 14 students nationwide who have demonstrated a capacity to contribute to the advancement of knowledge in the sciences, engineering or mathematics by completing original, creative work at an advanced level. 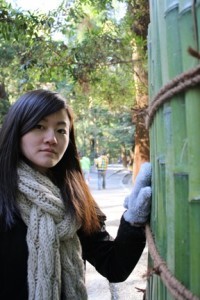 As a 2013 Churchill Scholar, Kodama will spend the next academic year pursuing a master of philosophy degree at the University of Cambridge in England. The foundation will provide full tuition and fees as well as a stipend for living expenses and travel.

Kodama, 22, has already completed the required course work for her bachelor's degree from the Zanvyl Krieger School of Arts and Sciences, majoring in neuroscience with a minor in the Writing Seminars. She will receive her degree in May before beginning her studies at Cambridge. Kodama will conduct research on the mechanisms underlying the formation of neural connections in the lab of Professor Christine Holt, specifically looking at growth cone mediated axon guidance.

Kodama, who was elected to Phi Beta Kappa as a junior, has dedicated a lot of her time outside of the classroom to research projects, a hallmark of the Johns Hopkins undergraduate experience. As the winner of one of the university's Woodrow Wilson Fellowships, which grant undergraduates up to $10,000 to pursue an independent research project over the course of their undergraduate careers, Kodama has worked since her freshman year in the lab of Dr. Mark Wu, an assistant professor of neurology at the Johns Hopkins School of Medicine. She is the co-author of a Currently Biology paper describing a novel circuit involved in promoting wakefulness in fruit flies. She is currently working on a project on the dopaminergic circuitry controlling feeding in fruit flies. She has been able to manipulate the flies' neural activity to promote feeding even after a short starvation period. She hopes that this research will bring light to the fly's regulation of feeding initiation and how it may be related to the growing obesity epidemic.

"I am extremely honored to have received this scholarship and would like to thank my research mentor, Dr. Mark Wu, who patiently introduced me to the world of scientific research, to all my professors who have disciplined me so well, and to Dr. Kelly Barry for supporting me throughout the entire application process," Kodama said. "Because of time constraints, I was not able to fulfill my desire to study abroad during my undergraduate career. I am hoping the year in Cambridge will not only mature me scientifically, but also culturally and enable me to develop a more worldly perspective."

Kodama's career goal is to become a physician scientist in order to expand the scope of stroke care. She is the president of the Hopkins Association for Stroke Awareness, a student group that works with the American Heart Association to provide blood pressure screenings at local health fairs. She said her work with the group and as a volunteer patient educator in Johns Hopkins Hospital's stroke ward led her to this calling to find additional stroke recovery treatments beyond the current limited options.

Alongside her research, Kodama has been active in extracurricular activities such as playing the violin with the Hopkins Symphony Orchestra, serving as vice president and layout editor of the literary arts magazine Thoroughfare, and as a member of the Community School Initiative, which provides science outreach through hands-on lab activities each week at Baltimore's Remington Community High School.

Kodama is the daughter of Yuji and Mie Kodama, and she graduated from Upper Arlington High School in Columbus, Ohio.