Nursing student has chance to compete for $100,000 scholarship

She will take part in Dr. Pepper Scholarship Challenge this weekend 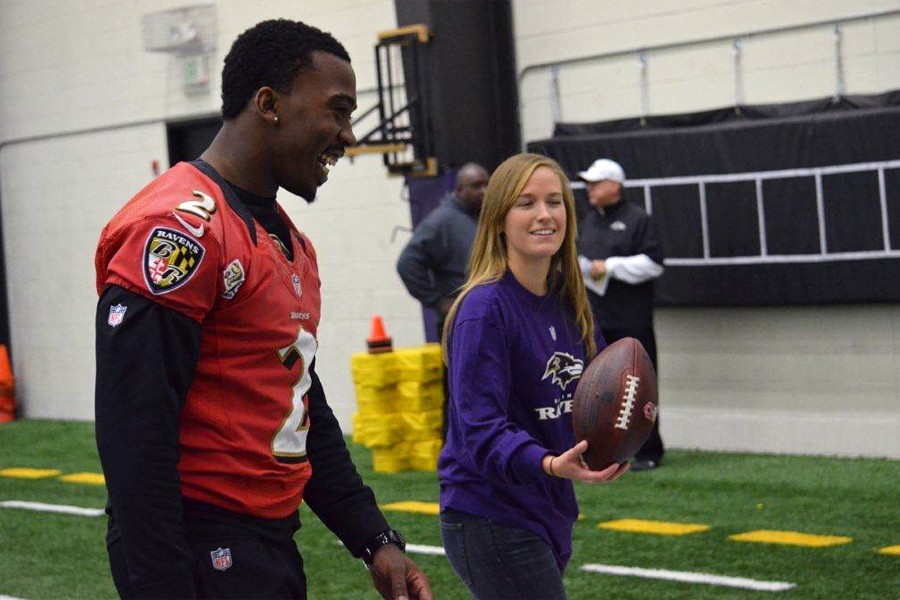 Image caption: Baltimore Ravens quarterback Tyrod Taylor worked with School of Nursing student Jennie Flanagan on her throwing technique as she prepares to compete in the Dr. Pepper Scholarship Challenge.

Johns Hopkins University School of Nursing student Jennie Flanagan focused on the target, a $100,000 scholarship challenge, and figured she'd worry about the details (like learning how to throw a football) later.

Then "later" came, but so did a lucky break.

Flanagan got a once-in-a-lifetime opportunity to work out with Baltimore Ravens quarterback Tyrod Taylor at the Under Armour Performance Center, the team's training facility in Owings Mills, Md. Taylor, selected by the Ravens in the sixth round of the 2011 NFL Draft, spent 15 minutes teaching Flanagan passing techniques after she received a tour of the facility.

The visit was in preparation for the Dr. Pepper Scholarship Challenge, a competition in which college students who submitted winning videos get to throw footballs into an oversized Dr. Pepper can in order to earn scholarship money.

"Specifically he told me how to release the ball," Flanagan said, "by using my index finger, making sure my foot is pointed at the target, and making sure that my arm, as I throw the ball, crosses over my body to the opposite side."

Any other advice from Taylor?

"Just don't be nervous," he said. "I know there is going to be a crowd out there. And then just to remember the mechanics that I had taught her and that she had worked on. If she can focus on that and tune out the crowd, she'll be perfect."

The final competition will take place this weekend in Charlotte, N.C., at the Atlantic Coast Conference Championship Game. Friday, five students will have 30 seconds to complete a preliminary challenge. The top two finishers will advance to the finals and compete at halftime of the ACC Championship Game, which begins at 8 p.m. on Saturday. The winner will receive a $100,000 scholarship while the runner-up will receive a $23,000 scholarship.

To see the video that earned Jennie Flanagan a spot in the Dr. Pepper Scholarship challenge, go to http://www.drpeppertuition.com/entry/46.