Rigaud runs for 138 yards in loss; JHU finishes with 10-2 record

The Johns Hopkins football team's playoff run came to an end Saturday as top-ranked Mount Union raced to an early lead and didn't look back in a 55-13 victory in a NCAA Division III second-round playoff game in Alliance, Ohio.

The Blue Jays (10-2) were led by senior running back Jonathan Rigaud, who ran for 138 yards, including a 75-yard scoring run in the second quarter. JHU added a late score on a 22-yard pass from Robbie Matey to Bob D'Orazio.

Mount Union took advantage of two Matey interceptions in the first quarter, converting them into a pair of touchdowns and a 14-0 lead. The Purple Raiders extended their lead to 21-0 before Rigaud got Johns Hopkins on the board with his long touchdown run. It was the fourth-longest run in JHU history and by far the longest against Mount Union this season—the previous high was 22 yards.

But Mount Union scored two more touchdowns before halftime, and led 55-7 before Matey's scoring pass with 1:23 to play.

"They have a very good defense, very fast and physical," Rigaud said. "I tried to be patient and we did what we could, but they are a very good team." 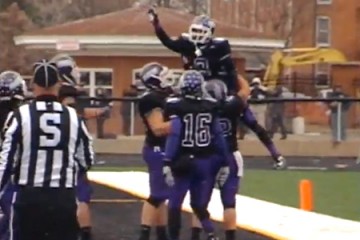