The Johns Hopkins football team raced to a 21-0 lead in the first 16 minutes, and five different players scored touchdowns as the Blue Jays rolled to a 42-10 win against Washington & Jefferson in the opening round of the NCAA Division III playoffs on Saturday at Homewood Field. The win marked the Blue Jays' first-ever home playoff win.

JHU (10-1) advanced to face Mount Union, the nation's top-ranked team, which defeated Christopher Newport 72-14 in its playoff opener. The complete NCAA DIII playoff bracket can be viewed on the NCAA website.

Quarterback Robbie Matey got the Blue Jays on the board with 6:28 left in the first quarter, scoring on a 7-yard run up the middle to cap a 17-play,69-yard drive. Two and a half minutes later, Johns Hopkins struck again, this time on a 5-yard scoring pass from Matey to Daniel Wodicka.

Scott Barietta added a 1-yard touchdown run in the first minute of the second quarter, one of his two scores in the game. JHU also got touchdown runs from Jonathan Rigaud (6 yards) and Jason Blade (5 yards).

The Blue Jays will travel to Alliance, Ohio, on Saturday to face Mount Union at noon. It marks the first meeting between the two schools, and the first time Johns Hopkins has ever faced the top-ranked team in the nation. Ticket information is available online. 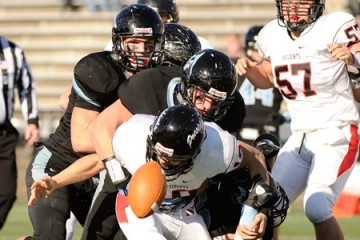