Sergeant Emily Thompson Schelberg, a member of the Marine Corps and a student at the Johns Hopkins University School of Nursing, has been selected as the 2012 NFL-Tillman Military Scholar for her leadership and service to the medical profession. 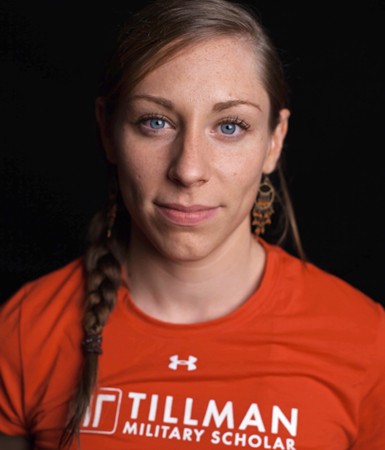 The award honors an individual who exemplifies the enduring legacy of service of former NFL player and U.S. Army specialist Pat Tillman.

Thompson Schelberg, a native of Pennsylvania who lives in Towson, Md., is pursuing a master's degree at the School of Nursing.

"I am definitely interested in prevention of diseases rather than treatment of diseases," Thompson Schelberg told The Baltimore Sun for an article that was posted online today. "Preventative, proactive health - the knowledge mechanisms to avoid diabetes and heart issues."

She will be recognized at Sunday's game between the Baltimore Ravens and Oakland Raiders.

"Emily's military experience and training opened her eyes to a career in health care," Marie Tillman, co-founder and president of the Pat Tillman Foundation, said in a release. "She is an extremely strong and dedicated individual who will someday make a difference in the quality of life of her patients. It's an honor to recognize her as this year's NFL-Tillman Military Scholar."

The Tillman Military Scholars program supports educational opportunities for veterans and active service members and their spouses. It covers direct study-related expenses such as tuition and books, as well as other basic needs such as housing and child care. Since the program began in 2009, it has provided more than $3.2 million in scholarship support to 230 individuals representing 34 states and attending 71 academic institutions.

Tillman played for the NFL's Arizona Cardinals from 1998 to 2001, but he put his football career on hold in 2002 and joined the Army Rangers. He was killed in 2004 while serving in Afghanistan. His family and friends established the Pat Tillman Foundation in his honor.