Surgeons use woman's own tissue to rebuild ear lost to cancer

Surgeons at Johns Hopkins have successfully created a new ear for a woman who lost one of her ears to an aggressive form of skin cancer, Johns Hopkins Medicine announced Tuesday. The reconstruction required six operations over a period of 20 months, beginning in January 2011. It is one of the most complicated ear reconstructions ever performed at Johns Hopkins, according to surgeons involved in the case. 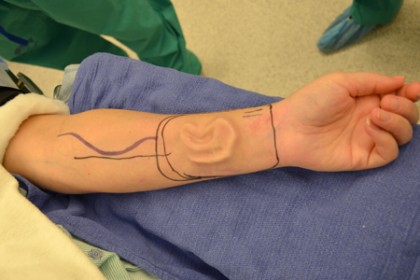 Image caption: After removing pieces of rib cartilage to assemble a new ear, surgeons implanted it under the patient's forearm skin for four months so that skin could stretch and grow around it.

The patient's left ear and part of her skull were removed to spare her life after a recurrence of basal cell carcinoma in 2010. Doctors constructed a new ear using rib cartilage, shaping it to match her other ear, then implanted it under her forearm skin for four months so that skin could grow around the ear.

"It's my skin, my bone, and the most realistic surgical replacement to what my ear was before my cancer," says Sherrie Walter, a working mother of two whose ordeal began in 2008 with the scab that "just didn't heal."