Medical errors are alarmingly frequent, Johns Hopkins surgeon writes, and little is being done about it

In his new book, Johns Hopkins surgeon Marty Makary takes aim at his own profession, writing that medical mistakes are alarmingly frequent and that—perhaps more alarmingly—very little is being done about it. Surgeons operate on the wrong body part. Procedures are performed unnecessarily. Yet rarely does someone speak up, Makary says.

"The culture of medicine, the way we do what we do, is the giant elephant in the room," Makary told Johns Hopkins Magazine for an article published in the Fall 2012 issue. "It should be transparent, yet it isn't."

Makary, an associate professor of surgery at the School of Medicine, has worked at a number of hospitals, including Georgetown, Johns Hopkins, D.C. General, and Harvard. His book, "Unaccountable: What Hospitals Won't Tell You and How Transparency Can Revolutionize Health Care," was published this month by Bloomsbury Press.

He wrote about medical mistakes for an article that appeared in The Wall Street Journal on Saturday:

When there is a plane crash in the U.S., even a minor one, it makes headlines. There is a thorough federal investigation, and the tragedy often yields important lessons for the aviation industry. Pilots and airlines thus learn how to do their jobs more safely.

The world of American medicine is far deadlier: Medical mistakes kill enough people each week to fill four jumbo jets. But these mistakes go largely unnoticed by the world at large, and the medical community rarely learns from them. The same preventable mistakes are made over and over again, and patients are left in the dark about which hospitals have significantly better (or worse) safety records than their peers. 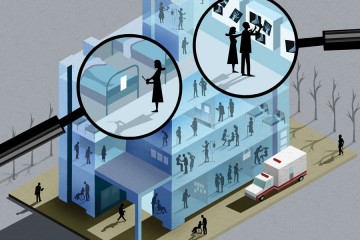