Provost's awards give students a chance to dig into important questions, explore ideas

Natalie Bray spent part of last summer poking around in woods, looking for bugs. On one excursion, the Johns Hopkins junior came across a red and black North American millipede, a "monster" some five inches long with row upon row of tiny red legs. She couldn't wait to grab it. 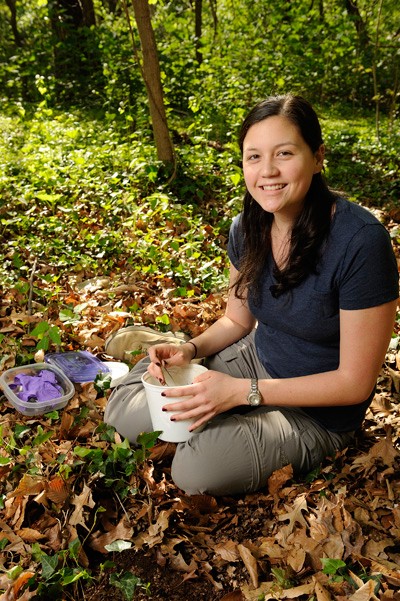 Image caption: Decaying leaves are fertile ground for Natalie Bray's research, an exploration of the impact of atmospheric carbon dioxide on leaf litter palatability and chemistry.

"I really like collecting," says Bray, who is majoring in Earth and planetary sciences. "I'm not squeamish. I've always liked bugs. I guess some folks think I'm strange like that."

Bray needed the crawly critter for her Provost's Undergraduate Research Award project about the impact of increased levels of atmospheric carbon dioxide on leaf litter palatability and chemistry.

Leaf chemistry, Bray says, is sensitive business. Soak up too much carbon dioxide, and the leaves could become unappetizing for organisms like millipedes, pill bugs and earthworms that eat dead and decaying plant matter. Even if the insects do ingest them, the altered chemistry of what they're eating could change the composition of their droppings that enrich the soil.

Bray's faculty adviser, Katalin Szlavecz, says that the impact of elevated carbon dioxide levels on the productivity of ecosystems deserves close examination, as it has ramifications for every living thing, from the tiniest insect that eats the leaves to humans who eat the fruit off trees.

"Understanding the soil food web is extremely challenging," says Szlavecz, an associate research professor in the Morton K. Blaustein Department of Earth and Planetary Sciences. "If successful, this method allows us to follow carbon from leaves through the soil food chain."

Since 1993, the PURAs have provided students like Bray with the opportunity to dig into important questions and explore ideas that could take them to a forest floor, a high-tech lab or across continents.

This year, grants of up to $2,500 funded 46 original research projects proposed and carried out during summer and fall 2011 by students in each of the university's four schools with full-time undergraduates: the Krieger School of Arts and Sciences, the Whiting School of Engineering, the Peabody Conservatory and the School of Nursing.

Mentored by faculty from across the university, the students pursued a variety of research activities, such as looking at the impact of new media in the Arab world, engineering brain tumor cells with built-in oxygen sensors and investigating the life and times of a little-known restaurateur and opera theater impresario in 19th-century New York.

Through donations from the Hodson Trust, the Provost's Undergraduate Research Awards program has supported 855 student endeavors over the past 19 years. Scott Zeger, vice provost for research at Johns Hopkins, says the awards are an important part of the university's mission and its commitment to providing research opportunities for undergraduates.

"These experiences are also about personal discovery," he says. "The students come to understand their strengths and weaknesses, and abilities they didn't think they had. Perhaps the way they thought about their problem wasn't accurate and they had to adjust their thinking. This all leads them to a heightened sense of intellectual maturity and a newfound sense of confidence."