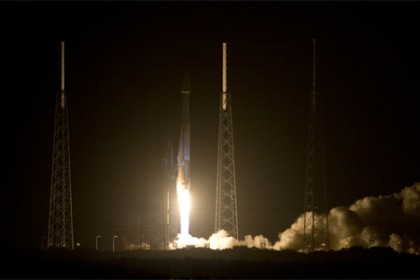 The two satellites, each weighing just less than 1,500 pounds, comprise the first dual-spacecraft mission specifically created to investigate the hazardous regions of near-Earth space, known as the radiation belts. These two belts, named for their discoverer, James Van Allen, encircle the planet and are filled with highly charged particles. The belts are affected by solar storms and coronal mass ejections and sometimes swell dramatically. When this occurs, they can pose dangers to communications, GPS satellites and human spaceflight.

"We have never before sent such comprehensive and high-quality instruments to study high radiation regions of space," said Barry Mauk, RBSP project scientist at the Johns Hopkins University's Applied Physics Laboratory (APL) in Laurel, Md. "RBSP was crafted to help us learn more about, and ultimately predict, the response of the radiation belts to solar inputs."