A champion for ideas of all shapes and sizes 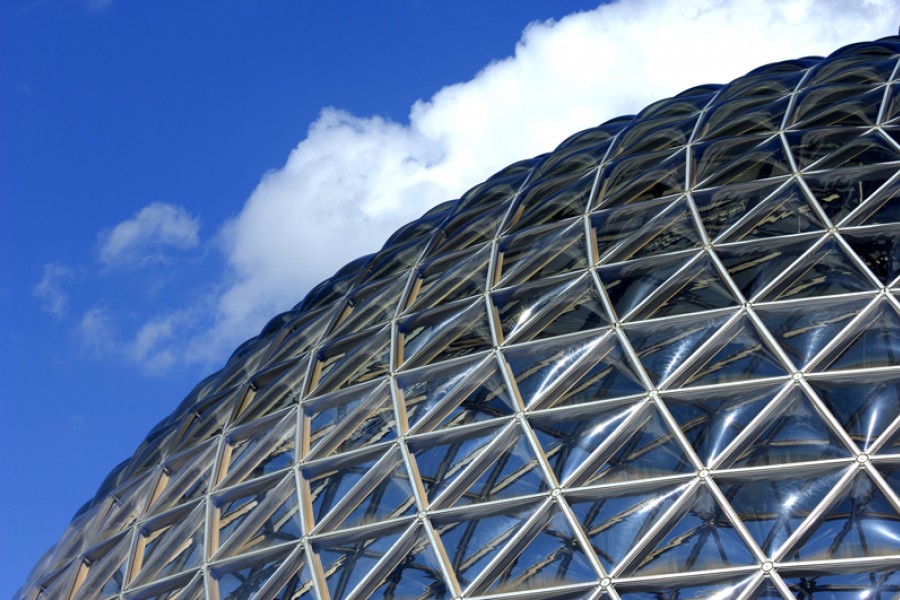 James Calvin believes that opportunities for innovation occur at the "intersection of change." Since change is a constant in our lives, he sees creative opportunities almost everywhere he looks.

His multiple professional positions provide a broad viewing platform. He holds joint faculty appointments in the Carey Business School and the Bloomberg School of Public Health and directs the university's Leadership Development Program for Minority Managers. He has consulted with communities and organizations across the United States and abroad.

If he had taken a more predictable path, his life would have revolved around cars. His father and uncles all worked for General Motors in Michigan. "Early on," he recalls, "I thought maybe I might want to design cars. Then I realized I didn't want to design cars. I was always interested in things like geodesic domes."

Although he rejected his family's automotive track, he readily absorbed the lessons of engineering and design innovation, "reading about breakthroughs, things that improved the automobiles, new types of inventions or modifications that improve life for people."

With that mindset, he put his fascination with geodesic domes to the test. As a doctoral student, he worked with the New York City Partnership, where businesses fostered innovation in public schools. Calvin incentivized three groups of underperforming eighth- graders with the promise of geodesic dome kits if they improved their grades. It worked, and he began "an exciting interlude" of injecting innovative practices into the intersection of education and business.

Since then, he has worked with academic organizations, businesses, government agencies, and nonprofit foundations—all with a view toward bringing groups together to find innovative solutions. "I had developed a very strong interest in systems dynamics," he says. "When you're able to work with these elements, sometimes you can spur innovation."

From the Navajo nation in Arizona to the breadbasket of the Dakotas, from a watermen's hamlet in Virginia to energy providers in Peru, he has helped communities improve their health, legal, educational, and economic systems. He challenges communities to envision a "new future," one that involves collaboration and innovation in governance. He asks leaders, "How do we get out in front, and how do we become proactive?"

Calvin is deeply involved with the Executive Leadership Council, whose members include CEOs and African-American business leaders in Fortune 500 companies. "The rapid pace of globalization and intensifying international competition requires that ... all managers have to consider growth and reinvention as practical areas of leadership and management development," he says. "At the same time, there is ongoing work internationally related to global leadership innovation."

Although he does not discount the possibility that an innovative idea can be ignited by a solitary individual, he says that "there are often other people contributing. Sometimes you're working with others and you're sparking ideas off one another." He also pays tribute to the imagination—found, for example, in the science fiction of Jules Verne—asking, "How do we take imagination and shape it and make something from it?"

Calvin thrives in the environment at Johns Hopkins. "The support for the ideas that people have around innovation, I think, is critical," he says. "The support is sometimes critical feedback: 'Have you thought about it this way?'" If you frame an idea differently, you can discover other options, "you open yourself up to possibility."

He enjoys describing the successes of his students. One nursing student, in a flurry of "social entrepreneurship," created a new Web-based system that provides information and access to medications. Another student, once lacking in confidence, became an award-winning public speaker and built a business around motivational speaking and confident communication.

On a larger scale, Calvin describes Oregon as "one of the first states to do what I would say is health care innovation for its citizens." Then he mentions the inevitable obstacle to innovation—the status quo. In Oregon, "regulations and red tape" nearly caused a halt to a visionary plan to provide health care. Calvin's role as facilitator was to suggest, "Let's be open-minded. Some things may require legislative appeals." Thus encouraged, the state "did amend some of its codes and regulations" and moved forward.

"I look at innovation as making a breakthrough," he says. "It's not necessarily something that's grand. ... I think a lot of innovation is process-driven. It's tinkering." But the tinkering is not aimless. "I don't see innovation by itself," he observes. "It's part of a larger complexity—but it clearly is a way in which you can set a compass."

In his role as mentor for young leaders, he helps them set their own compasses—and then he urges them to have confidence in the direction indicated. He cites an example from one of his classes on innovation in New York: "I had a student who had this idea called 'a slice of pizza,'" he says, describing a box that would solve the annoying problem of having pizza stick to the lid. "I said, 'I think you have a great idea here... I think you should trademark this.'" But the student hesitated, unsure of the value of his idea—and some seven months later, he read in a trade magazine on innovation that another company had introduced the same idea for boxing pizza—and would reap all the economic benefits.