The business side of politics

In 1919, German political economist Max Weber delivered what has become a famous lecture, titled "Politics as a Vocation." It was a substantial address, almost 23,000 words, and near the beginning Weber made the following distinction: "There are two ways of making politics one's vocation: Either one lives for politics or one lives off politics." The latter was not really possible until the turn of the 20th century with the growth of democracy and the rise of political parties. 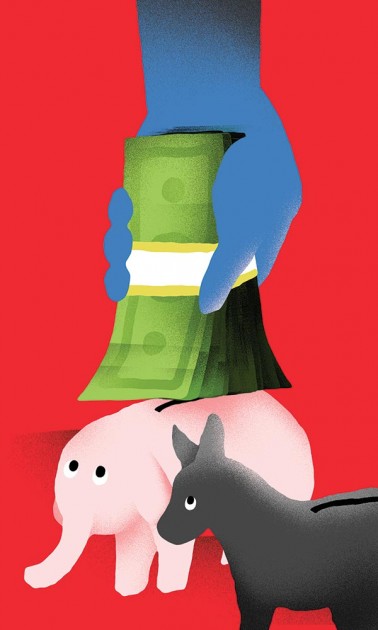 Johns Hopkins political scientist Adam Sheingate has long been fascinated by how many enterprising Americans pursue political careers less as players beholden to a political apparatus and more as enterprising individuals, political entrepreneurs who build their own brands and pursue their own ideas and initiatives. Several years ago he shifted his attention to a growing cadre of people who, in Weber's dichotomy, very much live off politics—professional political consultants, the advisers-for-hire whose occupation is getting people elected.

Political consulting has grown into an industry that, says Sheingate, took in $3.6 billion during the 2012 election cycle from candidates for federal office, political parties, and super PACs. Candidates used to rely on networks of local political operatives to win an election, the ward heelers and precinct captains and patronage dispensers of old. Now they rely on consultants who sell media services, polling, and direct mail expertise. How did American politics get here?

Sheingate, a professor in Political Science and currently department chair, set out to answer that question, especially its historical aspect. The result is his book Building a Business of Politics: The Rise of Political Consulting and the Transformation of American Democracy (Oxford University Press, 2016). The work examines two fundamental questions. How did consultants gain control of services that political candidates rely on to get elected? And what are the consequences? "The book traces the changeover from the party worker to the paid political consultant," says Sheingate. There were campaign advisers as far back as the early 1830s, he says, but until the 20th century, anyone seeking elective office, especially in a city, depended a great deal on the local political machine, especially the ward heelers whose job it was to make sure voters turned up to cast ballots for their man. That began to change in the 1920s, as political campaigns grasped the value of publicity in swaying public perception and opinion. Operatives learned the value of getting candidates into mass-circulation media by whatever means necessary and generating favorable press coverage.

In the 1950s and 1960s, television came to the fore, and with it political advertising. Initially, commercial ad agencies jockeyed for political campaigns just as they competed for commercial accounts. But involvement in partisan politics and controversial issues began to cost them lucrative commercial clients, so they got out of the business. Consultants stepped into the void and began directing campaign advertising. Changes in campaign finance rules, starting in the 1970s, really opened the gates because con­sultants were one place for cam­paigns to spend money legally. As campaigns became massively expensive, consultants began to rake in the fees and commissions.

One of the biggest implications for contemporary politics, Sheingate says, has been the amount of money now needed to win an election: "Consultants didn't create the system, but they certainly benefit from capital-intensive campaigns. They helped create tech­niques that politicians rely on that are very costly, like media buys and polling." There's an irony at the heart of those techniques, he says—the widespread assumption that advertising is a key to winning political office is not supported by data; studies have not found clear evidence of the efficacy of money spent on mass media. But consultants make so much money on commissions from placing political ads, especially TV commercials, that they continue to drive campaigns into huge advertising expenditures.

Sheingate finished the book before the rise of Donald J. Trump, the Republican presidential nominee. "One of the characteristics of Trump's unconventional campaign is that [throughout the primary season] he spent much less money than other candidates," he says. "This reflects his status as an outsider and the fact that he received what amounts to billions of dollars' worth of free media. That said, Trump did hire an experienced political operative, Paul Manafort, who was a principal in a leading GOP consulting firm." Furthermore, one of the largest political vendors that received business from the campaign was the Republican media firm Rick Reed Media. "So even Trump is relying on the consultant class to some extent."