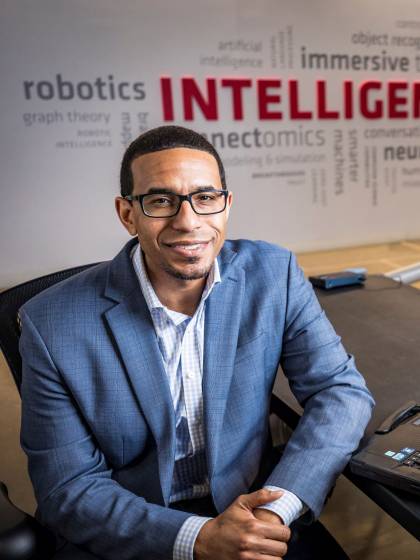 Ashley J. Llorens is chief of the Intelligent Systems Center at the Johns Hopkins University Applied Physics Laboratory, where he directs research and development in machine learning, robotics, autonomous systems, and neuroscience towards addressing the nation’s most critical challenges.

Llorens was recently featured extensively in a report by the Pew Charitable Trusts on how scientists are working to help robots learn how to think and teach themselves. In the PEW video, he discussed ISaaC, a humanoid robot “concierge” that has been programmed to detect and assign labels to specific objects. He also described a “perching drone,” whose ability to locate and attain perches in new environments demonstrates the need for robots to be able to intelligently perceive their surroundings and make proper decisions.

During his 15 years at APL, Llorens has led technical teams in applying machine learning to advance autonomous sensing capabilities for the U.S. military and has served as an advisor to the Defense Science Board. He received a master's degree in electrical engineering, with a concentration in digital signal processing, from the University of Illinois at Urbana-Champaign and is a voting member of the Recording Academy, the organization that organizes the Grammys.