Five Johns Hopkins graduate students have been selected to join the university's chapter of the Edward Alexander Bouchet Graduate Honor Society, which recognizes outstanding scholarly achievement and promotes diversity and excellence in doctoral education and the professoriate.

The Bouchet Society seeks to develop a network of scholars who exemplify academic and personal excellence, foster collegial and inclusive environments, and serve as examples of scholarship, leadership, character, service, and advocacy for students who have been traditionally underrepresented in higher education. The society is named for Edward Alexander Bouchet, who in 1876 became the first African American to receive a doctoral degree in the United States.

In opening remarks during the ceremony, Johns Hopkins University President Ronald J. Daniels discussed Bouchet's contributions to science and to history and the need to continue fostering diversity in higher education. The existence of the Bouchet Society reflects the need for universities to ensure that students from a broad and diverse range of backgrounds are able to pursue PhDs and that they are fully supported while they do so, Daniels said.

"We are fully committed to this endeavor as we are deeply committed to your success," Daniels said. "Because we know that whatever path you and your peers pursue, your voices and your discoveries will illuminate our world in new and vital ways."

The ceremony was hosted by Nancy Kass, vice provost for graduate and professional education.

The Bouchet Society now includes chapters at 17 American universities, with Johns Hopkins joining as an institutional member in 2018.

Gina Greenidge is a PhD candidate in the Department of Materials Science and Engineering, where her research focuses on the development of novel metallurgical techniques to synthesize nanostructured carbon materials. Her thesis contained "absolutely fascinating work on taking materials containing carbon and turning them into other materials containing carbon," said her faculty mentor, Professor Jonah Erlebacher. "This is actually incredibly important work related to the global challenge of [considering] what we do with carbon if we don't put it into the air as carbon dioxide."

Greenidge was born in Trinidad and Tobago and migrated to the United States to attend Howard University, where she was a Capstone scholar and graduated with degrees in Biology and Chemistry. She also received a Master of Science degree in Chemistry from Howard. While at Johns Hopkins University, she has been a student member of the Doctor of Philosophy Board and serves on the Diversity Leadership Council where she has been a strong advocate of measures to increase diversity in the graduate student body.

She is also passionate about mentoring and sharing science with students underrepresented in STEM and has been a Materials Research Society mentor and volunteer for activities such as Family Engineering Day. Greenidge hopes to pursue a career in industry while continuing to advocate for diversity in STEM.

Bianca Hand is a PhD candidate in the Department of the History of Art focusing on ancient Mesopotamian art. Her research focuses on investigating questions of alterity, materiality, style, and interaction at the royal palace at Khorsabad during the reign of the Neo-Assyrian king Sargon II (721-705 BCE). She received her bachelor's degree in archaeology with minors in art history and French from the College of Wooster. There, she received a National Science Foundation Research Experience for Undergraduates Award to excavate and conduct research for her senior capstone thesis. Her field work has also led her to Turkey, where she worked with the Tayinat Archaeological Project and the Hatay Archaeological Museum on the Basalt Reconstruction Project to reconstruct a monumental statue of an unidentified queen.

In remarks introducing Hand, Professor Marian Feldman, Hand's faculty mentor, commended Hand's commitment to fostering diversity in a field that is overwhelmingly white, male, and colonialist in view. "She brings her own voice to the table and in doing so she stands as a formidable role model for other underrepresented students studying the art and archaeology of the ancient world," Feldman said.

Hand was shaped by her appreciation of museums in her home city of Baltimore and hopes to relate her passion for ancient Mesopotamian art and archaeology to students from her community by pursuing a career in museum curation.

Dorian Jackson is a candidate for the PhD in the Department of Molecular Microbiology and Immunology at the Johns Hopkins Bloomberg School of Public Health. His research focuses on mosquito olfaction and specifically understanding the role of olfactory sensory neurons in the molecular mode of action for a chemical compound that is currently being utilized in vector control programs as an insect repellent.

Before coming to Johns Hopkins, he received a bachelor's degree in biological sciences with a minor in entomology from Virginia Tech and an MPH with a concentration in infectious diseases and vaccinology from the University of California, Berkeley. He spent the early years of his career honing his skills as a budding public health professional through various work experiences including entomology research at the U.S. Centers for Disease Control and Prevention in Atlanta as well as international disease surveillance work in Liberia with their Ministry of Health's division for neglected tropical diseases.

Beyond his work in public health, Jackson cares deeply about increasing diversity in STEM fields. Throughout his career, he has participated in various programs and initiatives that provide support for underrepresented minorities through mentorship and professional development training. "I'm particularly grateful for Dorian being a strong voice for change at Johns Hopkins, particularly within our department," said Jackson's faculty mentor, Assistant Professor Conor McMeniman.

Jackson hopes to continue in research specifically focusing on vector-borne neglected tropical diseases in order to merge his passions for basic science and public health service.

Emerald Jenkins is a candidate for the inaugural class of the dual PhD-DNP program at the Johns Hopkins School of Nursing. Jenkins' research focuses on meeting the needs of marginalized older adults with co-occurring dementias and physical disabilities and their caregivers. She involved with CAPABLE-Family, an adaptation of the Community Aging in Place—Advancing Better Living for Elders program. CAPABLE-Family focuses on supporting elders with dementia and their family and caregivers. Jenkins is the first student from the School of Nursing to take a computational medicine course in the Department of Biomedical Engineering.

She received a bachelor's degree in biology with a minor in genetics from North Carolina State University, master's degree in medical science from Hampton University, and a master's degree in nursing from Johns Hopkins University. She hopes to utilize her education to transition her clinical practice from psychiatric nurse to an adult/geriatric primary care nurse practitioner while building a long-term research/teaching trajectory. As president of the Black Student Nurses Association, Jenkins created a medical terminology course for the Baltimore Mayor's Office of Employment.

"She reaches far, but she's passionate about what she does," said Jenkins' faculty mentor, Assistant Professor Janiece Taylor.

Jenkins has a productive student record: she received two predoctoral fellowships through the National Institutes of Health, participated in a Diversity and Justice Working Group through the Gerontological Society of America, and served as limited faculty. Her long-term goals are to challenge power imbalances in health care education and research, improve pain recognition for persons with dementia, incorporate psychiatry in primary care, and build innovative human-centered care communities for elders. As former Nursing Advocacy Leader for Maryland, Jenkins believes that increasing accessibility for students from all backgrounds in higher education, and increasing diversity in the nursing workforce will improve health trajectories for aging populations globally.

Anna J. Moyer is a PhD candidate in human genetics at the Johns Hopkins University School of Medicine. Her research focuses on understanding how chromosome 21 genes contribute to abnormal brain development in Down syndrome. Before enrolling at Johns Hopkins, Moyer earned bachelor's and master's degrees in biology at the University of Alabama.

"In a scholastic tour de force, she has been able to pull together many different threads to give us a clear picture of what's going on in Down syndrome," said Moyer's faculty mentor, Professor Roger Reeves.

Moyer is committed to supporting individuals with disabilities through basic bench research and through disability advocacy. She co-founded the Equal Access in Science and Medicine committee to highlight the perspectives of scientists and clinicians with disabilities, chronic illnesses, and mental health conditions. She also helped to organize book clubs and film screenings celebrating the 30th anniversary of the Americans with Disabilities Act. In recognition of her research and advocacy efforts, Moyer received a Ruth L. Kirschstein National Research Service Award (F31) from the National Institute of Child Health and Human Development, the Maria Del Carmen Vitery Graduate Student Award, the National Disability Employment Awareness Month Achievers Award, and the Johns Hopkins Diversity Leadership Award. In her spare time, Moyer also manages a website of visual recipes and other resources to teach basic cooking skills to people with intellectual disabilities. Moyer feels that her own experiences having a chronic illness and having a sibling with Down syndrome make her a better scientist and disability advocate. 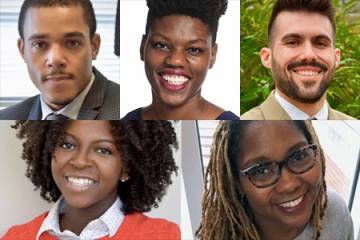