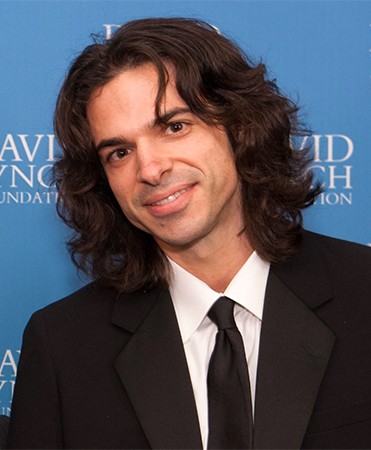 Director Paul Dalio dedicated his new film, Touched With Fire, to these and many other artists who lived with bipolar disorder. The film, which explores the relationship between two bipolar poets, was screened Monday night at Baltimore's Charles Theatre for more than 200 audience members as part of the Johns Hopkins School of Medicine Psychiatry and the Arts Series.

The film, written by Dalio and scheduled for nationwide release in February, draws from the book Touched With Fire by Kay Redfield Jamison, a Johns Hopkins professor of psychiatry. The book explores the relationship between art and illness, documenting high-achieving artists who lived with mental illness. Although the film is not an adaptation of the book, the book is featured prominently in the film's plot.

Katie Holmes and Luke Kirby star as Carla and Marco, two poets who meet while hospitalized for treatment of bipolar disorder. Their romance exacerbates their mania ("We bring out each other's nature," explains Marco), and their parents and doctors urge them not to continue to see each other.

The two struggle to understand their illness. Carla oscillates between worries about how her parents perceive her and the belief, instigated by Marco, that she is from another planet. Marco refuses to see the disorder as anything other than a gift, despite the fact that his mania poses increasing risk to himself and to Carla.

The stunning depictions of the disorder are suffused with color, movement, and stimulation. Van Gogh's "Starry Night" pulses and swirls in electric blues and yellows across the hospital walls while Carla and Marco build a spacecraft. Marco, whose poet name is Luna, sits on his roof and stares into an impossibly huge moon as it looms over him. Carla and Marco fixate on Jamison's Touched With Fire, referring to the book as "the Bible."

The film's interpretation of depression is equally artistic in its execution. Black and gray smoke billows across the screen, and Carla and Marco separately suffer through the bleak lows of the disorder. Conversations with her mother fade in and out as Carla fails to remain engaged. Marco, on the other hand, creeps into his darkened bedroom and folds himself into a blackened corner of his bed, disappearing from the screen altogether.

Neither strictly a love story nor a cautionary tale, the film depicts the humanity of people who have bipolar disorder. The emotional extremes of the characters are echoed by the reactions of their parents. Each character in the story lives in a world dictated by the disorder.

The screening was followed by a discussion featuring Dalio, who has bipolar disorder himself; J. Raymond DePaulo, Jr., director of JHU's Department of Psychiatry and Behavioral Sciences; and Jamison, who turned to the study of psychology after suffering a series of manic episodes in college.

Asked about treatment options for the disorder, DePaulo and Dalio said patients and their doctors were responsible for building an effective treatment plan together. Dalio noted that the last time he had been hospitalized for bipolar disorder, he had been admitted to The Johns Hopkins Hospital, and DePaulo had treated him. Essential to his recovery, Dalio said, was reading Jamison's book, which filled him with hope that he could manage his bipolar disorder.

Dalio and Jamison will return to Hopkins for the Johns Hopkins Mood Disorders Center's 30th annual Mood Disorders Research/Education Symposium on April 19. Information about future showings of the film is available on the School of Medicine website.